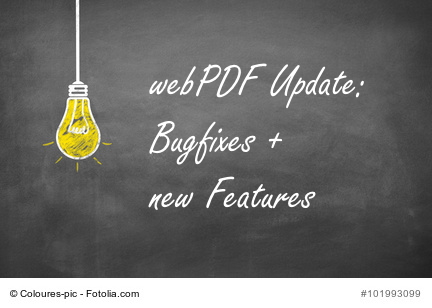 After the release of webPDF 8.0 in November last year, the first update is now available. With the revision number 2058 the new version is now available in the download area. It contains bugfixes and some new features:

XInvoice data in Universal Business Language (UBL) and UN/CEFACT Cross Industry Invoice (CII) formats can be transformed into HTML documents to create a visual image of the invoice data. A standard transformation, which is provided by the project https://github.com/itplr-kosit/xrechnung-visualization of the “Koordinierungsstelle für IT-Standards” of the Free Hanseatic City of Bremen, is also used for this purpose.

By specifying the appropriate PDF/A parameters, a PDF/A document can be created directly during OCR text recognition. Furthermore, the used OCR engine tesseract has been updated to version 4.1.1, so that an improved recognition is now possible.

Static XFA forms are now processed during Merge & Split. So it is now possible to merge XFA documents with non-XFA documents. Existing XFA documents can be split, so that they are still AcroForms. Although the original XFA data is lost during the above operations, the documents created in this way can still be used as AcroForms.

Furthermore, most of the webPDF libraries have been updated to close possible security holes. Especially the OpenJDK was updated to 11.0.6._10.