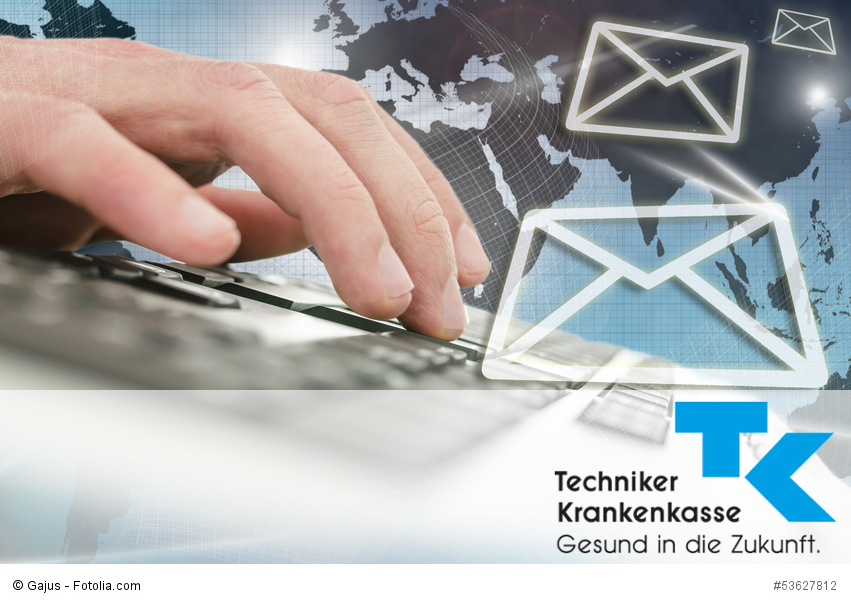 In the healthcare sector, dependable and trustworthy communication between health insurance organizations and their policyholders is everything. E-mail, of course, plays a key role in all of this. The daily flood of incoming mails and the many statutory requirements for compliance, security, and archiving pose an enormous challenge for IT departments and administrative staff alike. A system of professional e-mail management can support health insurance providers in mastering these challenges. This is why the health insurance company Techniker Krankenkasse (better known throughout Germany by its initials TK) decided to optimize its communications processes and automate its workflows. Now, and with the help of highly functional software, e-mails and their attachments are correctly and reliably converted to PDF/A files. This also ensures that documents can be archived in a manner that is fast, consistent and legally compliant.

Some 13,000 TK employees look after the healthcare needs of 10 million insured customers. Although e-mail plays an increasing role in all of this, it remains both a blessing and a curse for modern communications. And it’s becoming more and more difficult to efficiently handle and process the rising flood of electronic inquiries and requests using traditional means. Therefore, TK decided to implement an e-mail response management system (ERMS) to ensure its customers continue to receive the best-possible service and reduce the workload of its employees. This kind of system can not only classify and interpret e-mail content, but also generate the proper text elements to respond to the received messages.

One part of the project involved re-designing the way mails and their attachments are archived. Some 30,000 e-mail attachments in various file formats flow into this health insurance company’s system every day. TK had been using a number of different integrated applications to convert incoming PDFs to archivable PDF/A files, and to convert outgoing TIFF and AFP formatted documents into PDF and PDF/A files. “These earlier solutions were neither sufficiently robust and flexible, nor did they support an adequate number of formats, which meant we could not use them for converting mails to PDF/A,” explained Jörg Florin, a subject-matter expert and framework developer at TK.

As a leading health insurance provider, TK wanted the capability of archiving all incoming e-mails as PDF/A files within the new ERM system, which would also enable the company to transfer to the application system those e-mails which cannot be readily processed or answered. The applications the company had been using were, however, simply not designed to do that. It was while looking for just the right solution that TK came across SoftVision‘s server-based software called webPDF.

The webPDF solution provides this health insurer with Java-compatible interfaces that allow it to run the conversions directly from within the Java process itself. Other solutions, for instance, involved running a remotely controlled Office application on the server to convert documents in batches. “That was not a particularly appealing solution for us,” said Jörg Florin. The thing he found so compelling about SoftVision’s product was the extensive range of formats that webPDF can convert. “Since we cannot know what kind of documents our customers might send us, we have to have the capability of handling a vast range of formats – and webPDF covers our needs entirely.” Another thing Florin likes about webPDF is the way it supports the open office format and, unlike the earlier Java library that was used, can create PDF files that do not consist only of raster images. “Besides requiring a great deal of storage space, such raster graphics also make using the PDF files more difficult,” explained the IT specialist.

Once an e-mail arrives on the central server, a gateway decides what should happen next to the mail based on the recipient’s address. The e-mail is also copied and signed, after which it is separated into it component parts. Then webPDF converts the body and attachments individually to PDF/A documents, with the conversion to TIFF format being done at the same time. The PDF/A documents are then transferred to a document archive. TIFF files are used for optical character recognition (OCR) and to identify such information as customer numbers, which can be used to automatically direct the mail. Alongside that, the original e-mail is forwarded to the ERMS and then processed by a TK representative, whose response is then filed together with the incoming mail in the archive system.

As a framework expert, Florin was especially excited about the low error rate. The success rate for the 30,000 attachments that are received every day was 99.8 percent. “The remaining 0.2 percent include documents that cannot be converted and must be reviewed manually,” said Florin. “And the failure rate was less than 0.01 percent.”

TK also uses SoftVision’s solution to convert online forms and the documents that policyholders upload to its server. Florin knows he can depend on SoftVision: “We were impressed by their quick support right from the get-go.” Together with SoftVision, TK has already developed interfaces to employ webPDF on the health insurer’s servers. TK quickly receives new test versions in connection with error reports. “We never experienced anything like that with other products, and it is not something we take for granted,“ added Florin. The Techniker Krankenkasse has found in webPDF the perfect solution for doing document conversions.