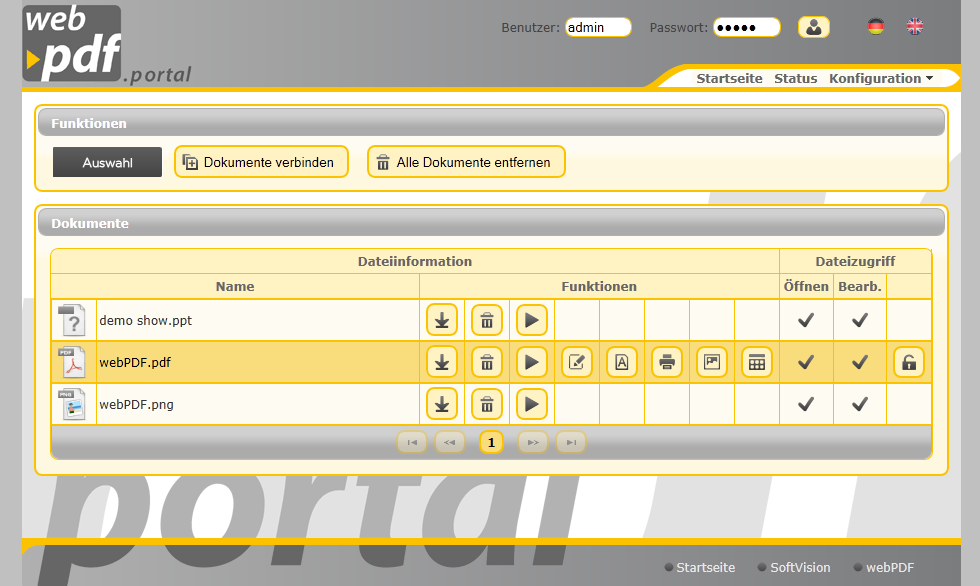 Since 01.08.2011 the new version 3.0 of webPDF is available. The new version features a new web portal and new web services for PDF processing.

A completely new web portal has been integrated into the new version 3.0. This makes it possible for every user to use the functions of webPDF with a simple web browser. With the portal you can convert any documents into the PDF format, sign existing PDF documents or print documents on the server. It is also possible to export to graphic formats or edit a PDF document afterwards (e.g. divide, rotate or delete pages).

In addition, there is the important support of PDF/A. With the new version of webPDF you can create PDF documents directly in ISO standard 19005-1. In addition, existing PDF/A documents can be checked (validated) against the standard. In addition to integrating the functions into the web portal, all functions can also be called up directly as a web service. Thus webPDF can be integrated into other applications or programming languages.

webPDF 3.0 provides companies with a central platform for handling PDF documents. Centrally installed and administered, and accessible from anywhere – without installing software on the client. Reduce your operating costs when dealing with PDF documents. Install webPDF under Windows or Linux on a 32bit or 64bit platform, or use the virtual machine for VMware.