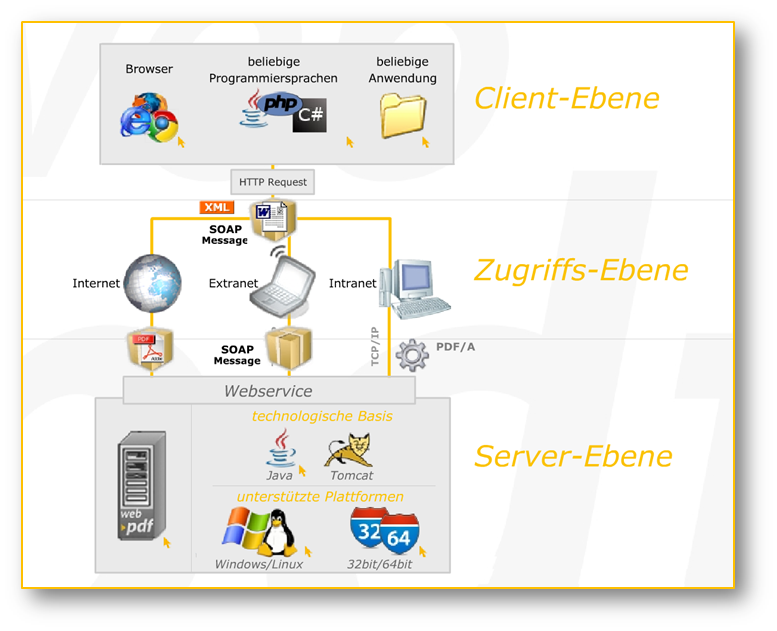 webPDF provides all the developers in your organization with a complete range of web services for creating and managing PDF files, along with the option of integrating these services into your own applications.

Providing PDF capabilities as web services goes beyond just adding enormous value to your daily business processes. How they can be used is limited only by the creativity of your developers. The webPDF tool not only opens up a whole world of possibilities for users, managers and administrators, but is a source of nearly boundless potential for developers just waiting to be exploited.

The benefits that come from being able to create and process PDF documents are many and include giving you clarity and peace of mind when dealing with vast num­bers of different file formats. This is the kind of real added value that software developers can plug into their own applications, given that the tool allows the SOAP-based web services to be integrated in any number of different ways. These can be incorporated into your own applications quite easily by means of clearly defined application program interfaces (WSDL) and the J2EE architecture.

Many options are available, and how you actually implement them will depend on your specific needs and requirements. In addition to being usable in such pro­gram­ming languages as Java, C, C++, .NET and Delphi, these web services can also be employed in enterprise applications including SAP, IBM Domino and Microsoft SharePoint/Exchange. And they can even be integrated within content management and shopping cart systems.

There are only two things you need before you can use webPDF and the web services: Java 7 (JRE 7 or JDK) installed on your enterprise server, and a platform such as Windows (XP, 2003, Vista, 7, 2008, 2008 R2, or 8) or Linux (various distributions of kernel version 2.6 or higher). webPDF is available in both 32-bit and 64-bit versions for Windows and Linux.

The web services come with a software development kit (SDK) that enables de­vel­opers to use detailed and extensive parameter controls to manage the creation and processing of PDF documents. The web services can be integrated using WSDL (Web Services Description Language) and then controlled through the network protocols HTTP (Hypertext Transfer Protocol) and SOAP (Simple Object Access Protocol). In this way you can automate processes and optimize the workflow throughout your company.