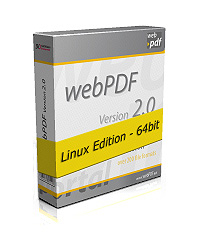 Use webPDF on the VMware virtual platform

Virtualization on servers or desktop PCs is the established method for consolidating applications with on-demand resource allocation. Deploy any number of virtual systems on a single physical system with VMware® software, the leader in virtualization.

We also want you to be able to use webPDF on virtual systems and have developed webPDF for VMware®. Use the full range of functions of webPDF on your virtual platform. After a simple installation webPDF for VMware is ready for use in only five minutes – without configuration.

webPDF for VMware® is based on Linux (Debian) and can be easily integrated into existing IT structures. Test all functions without risk, because there is no installation on existing systems.

Further information and the download link to webPDF for VMware® and the individual VMware products can be found here.