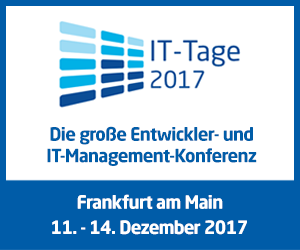 We will be presenting our updated PDF server to interested visitors just ahead of Christmas at the IT-Tage trade fair and conference being held in Frankfurt am Main from 11-14 December. Besides introducing webPDF 7.0, we also want to share insights across a wide range of information technology subjects and get to know other people and companies involved in developing software.

A glimpse of this year’s topics

Billed as the IT conference for software development, architecture and management, this third iteration of IT-Tage 2017 is again being held in Frankfurt am Main where it will offer all the leading software suppliers and IT service providers a venue for presenting their products to a broad public. This information technology trade fair will primarily address developer, administration and management topics. Because this is an IT management and developer conference, the organizers want to cover a particularly broad range of subjects geared not only to technical experts and developers, but to all those business leaders and project managers whose work involves such matters as agile software development, DevOps, continuous delivery, cloud computing, big data, the Internet of things, microservices, Java, Docker, Node.js, and Angular, along with various database technologies including OracleDB, MS SQL Server, MariaDB/MySQL and NoSQL.

The IT-Tage series of conferences was initiated by Informatik Aktuell, a weekly magazine for professional software development and information technology that can draw on a large pool of specialized journalists and writers, who’ll be speaking about the most relevant topics in the industry today. Unlike other larger and more anonymous events, the emphasis will be on hosting an informal and more personal conference. This is precisely one of the reasons why we’ve decided to take part in the conference and are looking forward so much to closing the 2017 year in the good company of our valued associates and the many new contacts we hope to meet.