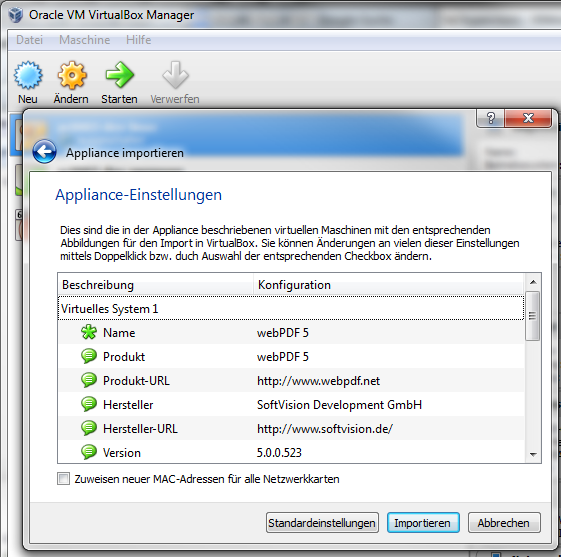 The webPDF virtual machine (VM) is now available in the Download section and in its open virtualization format runs on VMware or VirtualBox.

This VM is the fastest and easiest way of rapidly deploying or simply trying out webPDF without having to install anything on your workstation or server. And it can also be set up on the hypervisors VMware or VirtualBox.

Linux as the basis for the virtual machine

This new VM is provided in open virtualization format (OVF) and uses the 64-bit version of Debian 7.1 (Wheezy) for x86 processors as the operating system. The VM settings are set to use a quad-core processor and 1 GB of RAM, which is also the minimum needed for operation. The VM is configured to directly launch the webPDF server and obtain an IP address via DHCP. The web services and portal can be used immediately after being started. Once launched, the VM displays the IP address being used right on the console.

Can be easily customized

The virtual machine is based exclusively on the standard packages included with Debian 7.1 Wheezy distribution. Administration can be done both remotely using SSH (e.g. with PuTTY) and locally by logging in to the console with the user name root and the password root. For security reasons you should change the password using the Linux passwd command after you log in for the first time.

OpenJDK 7 was used as the basis for the webPDF server. Various packages of TrueType fonts were installed to support the conversion of documents such as those in the Microsoft Office formats doc or ppt. You can add your own fonts to the list by installing the fonts into /usr/share/fonts/truetype/ and then restarting the webPDF server with /etc/init.d/webPDF.sh restart.

Any settings you change on the virtual machine, such as to give it more memory or boost its CPU performance, can also be transferred to the webPDF server. The webPDF installation can be found in the folder /usr/local/webPDF. You can, for example, edit the webPDF.sh file and give the webPDF server more memory by using the JRE startup parameters. Don’t forget to restart the server after making any changes.

Once you have installed the virtual machine and adapted it to your needs, the easiest way to try out and test the webPDF server is through the web portal. Open your browser (Firefox, Internet Explorer, Safari, Chrome, etc.) and access the portal using the address that is displayed in the initial login dialog:

Once the portal has loaded, you can simply upload a document and convert it to PDF. Or if you already have a PDF, you can digitally sign the document or make it conform to PDF/A. Give the webPDF browser a try!