IT Innovation Award 2013 for webPDF 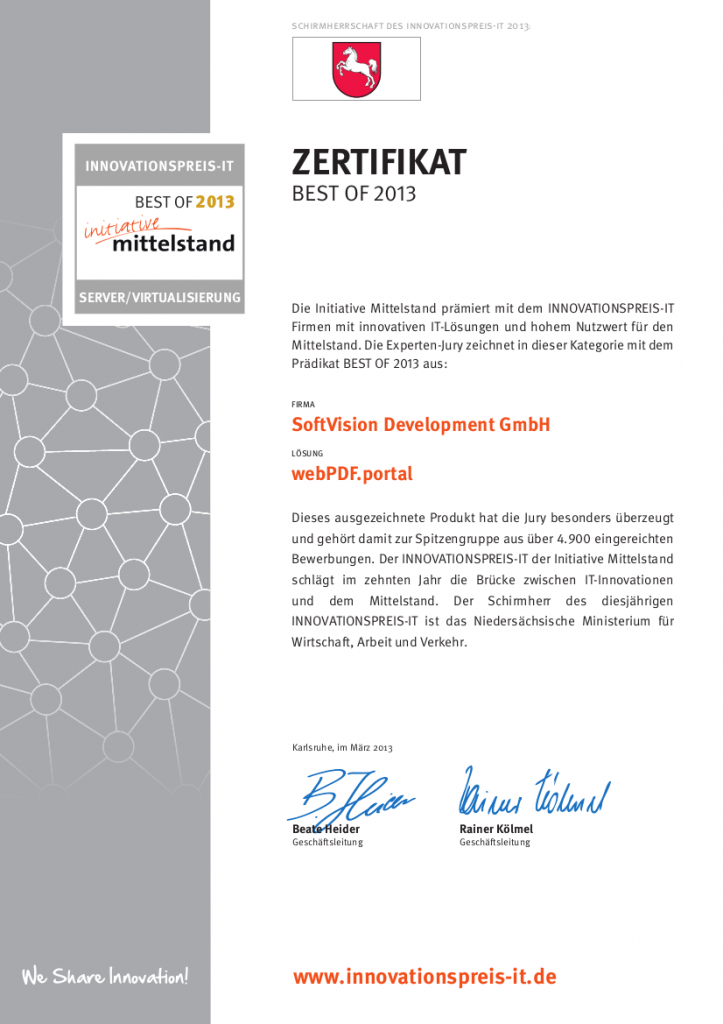 SoftVision receives award for its webPDF.portal. SoftVision Development was honored in March in the context of the german award “INNOVATIONSPREIS-IT” by the “Initiative Mittelstand”. With its solution webPDF.portal SoftVision belongs to the top group among more than 4900 participants.

In the category “Best of Server / Virtualization 2013”, the server-based solution webPDF.portal was able to convince the top-class jury of professors, economists and specialist journalists, who confirmed the high utility value of the tool for medium-sized companies with this award. For the tenth year in a row, the INNOVATIONSPREIS-IT has been awarded to progressive ideas in the IT sector and this year’s motto was “We Share Innovation”.

With the award-winning webPDF.portal, SoftVision has created a platform-independent web service on which users can convert files into PDF, archive PDF and digitally sign PDF. The webPDF server has an integrated web portal that is installed centrally once and then made available via the web browser to use the PDF functions.

The Initiative Mittelstand awards the INNOVATIONSPREIS-IT at the annual CeBIT to innovative IT solutions suitable for small and medium-sized businesses that offer companies the opportunity to increase their competitiveness.

The jury sees this requirement fulfilled by the webPDF.portal, because the developers of SoftVision react with their product to today’s requirements of companies to act flexible and location-independent. With the webPDF.portal, users have the possibility to access the portal comfortably while on the move. Whether using a PC, smartphone, laptop or tablet – PDF documents can be centrally created, processed, exported and printed from anywhere. The application can also be easily integrated and integrated into existing IT structures and workflows, thus creating individual and optimally adapted solutions for every company.